The dog’s superlative olfactory capabilities have long fascinated us humans. Throughout the centuries, we have

used it in several ways for our benefit. In recent times, the use of this super-sense of canines in the Medical

field has increased quite a bit. Dogs’ ability to appreciate changes in odour associated with certain diseases,

sometimes, even those that only have molecular level changes, is astounding and is finding new applications in

the healthcare industry each day.

Like we already know, the dog’s hardware for smell is pretty jacked.

Their bigger olfactory setup, both in terms of nose and the respective innervation and nerve centres, means that it can detect one drop of a substance in a swimming pool filled with gallons and gallons of water.

To know more, click here, to go to our article on how the dog’s sense of smell works. 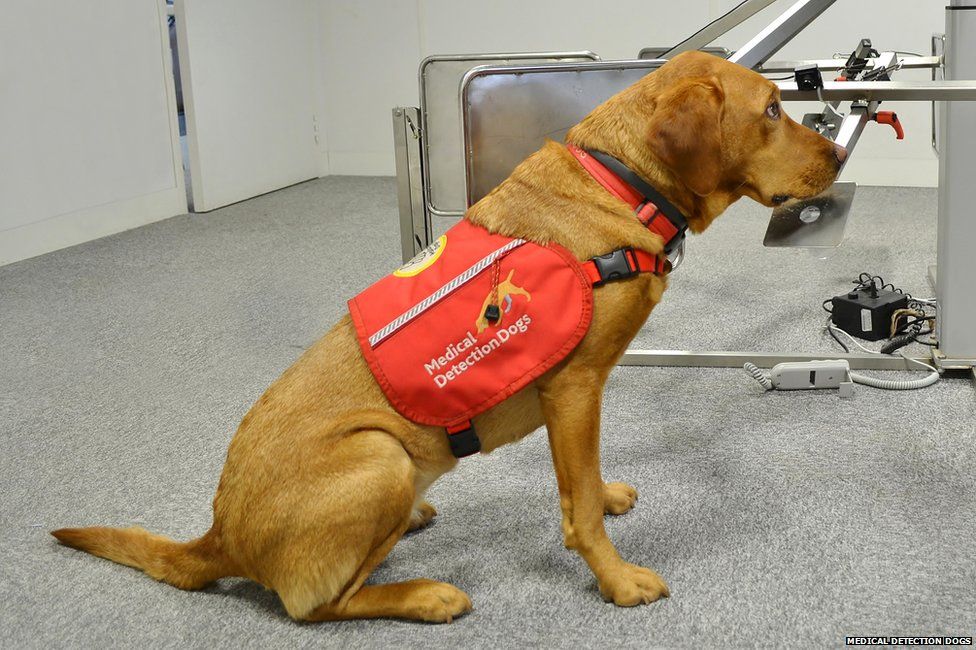 Dogs that can sniff cancer have been approved for use in a trial by the NHS, in the UK.

Medical Detection Dogs, a charity which works with NHS trusts and universities, has had approval from Milton Keynes University Hospital for more trials.

Its first study showed specially trained dogs can detect prostate cancer in urine in 93% of cases.

At the moment the Prostate-Specific Antigen (PSA) test, which has a high “false positive” rate, is used to find out if men need further tests.

Cancer “volatiles” travel from the infected cells into the urine as the body tries to dispose of the chemicals.

It’s thought that dogs can pick up the odour of volatiles in urine samples.

It’s thought through training, the animals can be taught to react to their presence.

It’s too early to know how canine testing may be used, and how widely it could become.

But it’s thought that it’ll act as a “second-line” check after the traditional Prostate-Specific Antigen (PSA) test.

The PSA test examines levels of proteins produced by the prostate gland and is used to determine if men need a biopsy.

But it has a high “false positive” rate, meaning many men are unnecessarily referred for further tests.

What If a Dog doesn’t Detect Cancer?

Each sample is tested by two or three dogs.

If a conclusive result isn’t produced, the patient’s urine will be tested again the following day.

How are The Dogs Trained?

During the process, the dogs are trained with positive reinforcement to detect cancer.

Initially, the dogs are rewarded with treats for detecting any urine smell, but later they are only rewarded when they detect cancer in urine samples.

There’s no proper research to show that untrained dogs can detect cancer, but there is some evidence.

Dr Claire Guest, co-founder of Medical Detection Dogs, realised she had breast cancer after her dog, Daisy, began nudging an area of her chest which felt bruised.

Other owners have reported behaviour changes in pets prior to being diagnosed with cancer.

Specific canine breeds have long been used as companions for the blind as guide dogs, but over the last few decades we’ve seen our furry friends emerge with new potential and responsibilities. Trained working dogs are now used as companions for people with epileptic disorders, for instance. These medical companion dogs are trained to monitor their human for signs of an impending seizure to include changes in breathing or posture, and to alert the human to the event. Companion dogs are also used to help calm owners who may suffer significant post traumatic stress disorder, or PTSD. Most recently emerged are the group of medical alert companion dogs who are trained to detect potential diabetic emergencies, such as very high or low blood sugars, in their owners.

How Your Dog Can “See…

Which Dog Breed Should I…

Why Is Deworming My Dog…

Does My Dog Dream About…

Reasons To Adopt A Special…

Malaysia: Should I Microchip My…

Why I Should Never Shave…

Is Your Dog In Pain?…